BUG IN vs BUG OUT COMPARISON

The bug in vs bug out debate is a heated one. Here's why... 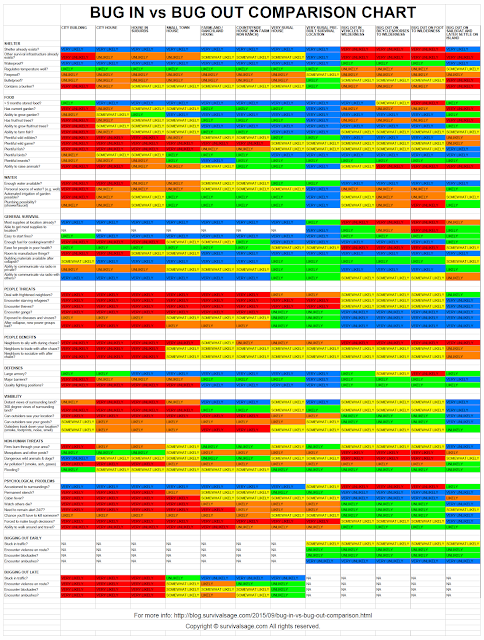 As you can see, there are pros and cons everywhere, no matter what your choice is. Now, this chart is based on a quick total collapse of society, such as the grid going down for good. If you were to do this chart based on temporary emergencies or regional emergencies, there would be more blue in the stay at home columns.

To get an idea of how the scenarios rank, we can do a simple count of the colored boxes in each column. Here's the results for that.

From this simple tally, it looks as though the very rural pre-built survival location is the best option, with bugging out on a sailboat in a close second. However, you've probably realized that not all of these pros and cons are equal. Some are much more important than the others.  For example, 9 months stored food and not encountering gangs is far more important than something like room to manufacture things. To fix this, we can just assign values to each of the rows based on importance. I did this in this next chart. Take a look and see what you think. 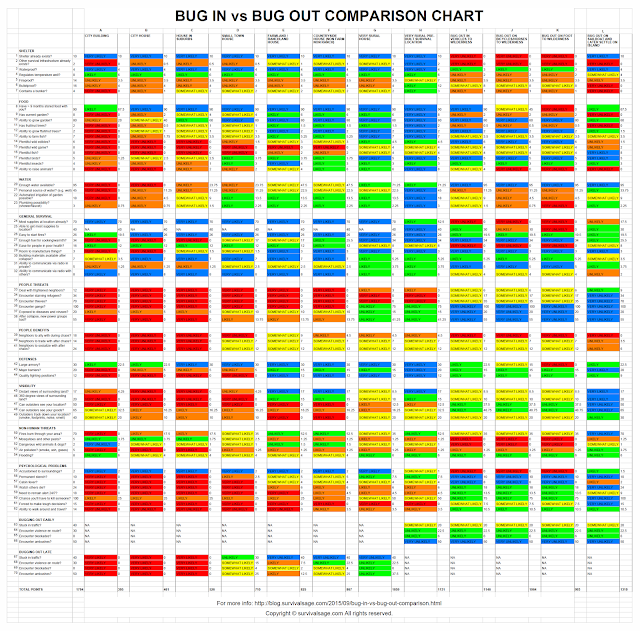 So, according to this chart with the values, in a total collapse, bugging out on a sailboat and later settling on an island is the ideal choice. I agree with this. Bugging out on a sailboat really does eliminate a LOT of problems, since you'll be able to avoid nearly all of the chaos. Bugging out in vehicles to the wilderness comes in second according to this chart, which is ok, however I think that if multiple people are able to come together at the pre-built survival location, then that should be the next best option. This chart doesn't account for the potential security in numbers. The problem is that two of the top choices (sailboat and pre-built) will generally require at least a $50,000 investment. I suppose the good news is that the next best options, bugging out to the wilderness, won't require any investment beyond your general survival supplies.

Feel free to examine this chart and value system to better assess your own survival situation to see if you should bug in or bug out.

COLUMNS:
CITY BUILDING - An apartment building or condo building.
CITY HOUSE - A house that is in the city and packed close to other houses and probably not a large yard and maybe no yard at all.
SMALL TOWN HOUSE - In a town of a few thousand about 150 miles from a city.
FARMLAND / RANCHLAND HOUSE - A house that is right next to crops, orchards, dairies, or a ranch with lots of cattle. You can generally expect small towns to be nearby and larger population centers an hour or more away.
COUNTRYSIDE HOUSE - Just an isolated house in the country.  Likely small towns a few miles away and larger population centers an hour or more away.
VERY RURAL HOUSE - Far from population centers.  Maybe a dirt road leading to it.  Perhaps some scattered neighbors.
VERY RURAL PRE-BUILT SURVIVAL LOCATION - This is a location that is built to be the ideal safe location in which to go if the shtf. It would be the right combination of keeping you safe and giving you the ability to grow food and thrive. Likely, this would be a location that is stocked, supplied and ready to go for the end of the world as we know it, but not occupied by you year round, so for the chart, I considered it a place to which one could bug out. It is also a good idea to be designed to house a few families.
WILDERNESS - National Park, National Forest, State Park, BLM land, or very rural undeveloped land. You would camp in a location that is off road and off trail, so this goes far beyond just camping in a campground or along a main river. I mostly had the western US in mind with this. Bugging out to wilderness east of the mississippi would not have results as good as they are in this chart.
BUG OUT IN VEHICLES TO WILDERNESS - You would take a day or two to pack up and then bug out.You would have a large truck, multiple vehicles, or even a trailer to ensure you are able to bring all of your survival supplies, including enough food to get you to the first harvest. You would drive as close as possible to your desired destination, park the cars, and shuttle all the supplies a mile or two into the forest/bush/wilderness.  (You would probably drive the vehicles another mile down the road and hide them.)
BUG OUT ON BICYCLES/HORSES TO WILDERNESS - You are more mobile than on foot. You will hopefully be able to have wagons behind you or enough horses to pack plenty of survival supplies, but you probably won't be able to bring everything. The destination would be the same--off road and off trail.
BUG OUT ON FOOT TO WILDERNESS - The traditional method here is to pack everything in a backpack and walk out. With this method, the biggest disadvantage is you wouldn't be able to bring with you 9 months supply of food and lots of survival gear, and this is the method I had in mind for the chart. However, if people were to load up their supplies in garden carts or wagons, 3 to 5 times as much supplies could be brought. It would make the column almost as good as the bicycles/horses column, but you would still be very slow and more vulnerable.
BUG OUT ON SAILBOAT AND LATER SETTLE ON ISLAND - This could be a situation where you live somewhat close to the docks.  You have a good amount of survival supplies aboard already, but you have to load more. You would set sail within a day. A 40' catamaran or lager would be ideal. Communications and GPS would be out, so navigation is more dangerous, but being out at sea is safe from the human chaos. You could sail for an uninhabited island or even a sparsely populated island, where you believe the population will be able to survive. Of course, if it is a situation where only North America collapses, you can simply sail to a country that hasn't collapsed and start a new life. Indeed if only North America collapses, I would suggest anyone with access to a sailboat should try that method.

ROWS:
"Other survival infrastructure" - things like smokehouses, outhouses, BBQ pits, wood stoves, fish ponds, etc.
"> 9 months stored food" - this is a good benchmark, since it should give you enough food to get to the first harvest.
"Enough water available" - without having to travel too far or expose yourself too much
"Personal source of water" - having your own source, such as a well or water harvesting system helps to ensure plenty of availability of water, but more importantly, can help you avoid run-ins with others who are fetching water or fishing.
"Automated irrigation of garden" - something other than manually watering with buckets. Could be a system of pipes or hoses from a body of water or a tank/gravity feed system, just something to cut down on manual labor.
"Plumbing possibility" - just the ability to set up showers and faucets, not necessarily flush toilets. It comes down to the ability to have drums/tanks/jugs with a satisfactorily sanitary runoff.
"new power groups" - after the collapse, some groups, such as gangs, warlords, and militias will rise to power. If these groups are not civil and steal to survive, that will be a problem.
"Major barriers" - these are barriers that would prevent attackers from over running you, such as barb wire, moats, walls, abatis, etc.
"Quality fighting positions" - if you get into a gun fight, these would be good places to take cover and shoot at the attackers
"Can outsiders see your goods" - goods would be gardens, food, tools, supplies, living quarters, etc. A lot of this depends on how close your house is to the road and what kind of fence or wall you have. A high wall is best. A low see-through fence is the worst. Also, can people see through windows?
"Fires burn through your area" - Fires will start from riots. Fires will also start from people cooking over open fire and warming themselves with fires. There will be mistakes and buildings and forests will catch on fire. There won't be any firefighters to put out fires. Fires will be a threat in the city, countryside, and forests--almost anywhere. So, this is asking if fires will burn through your area and kill you or destroy your livelihood.
"Accustomed to surroundings" - for some people, being accustomed to your surroundings will be helpful in easing concerns, even though in reality, it is a false sense of security.
"Permanent stench" - this will come from trash, sewage, burnt areas, and dead bodies rotting.
"Watch others die" - this will be instances where you turn starving people away, knowing full well that they will probably starve to death soon. It could also be seeing people die from violence outside or maybe it was people you had to kill.
"Need to remain alert 24/7" - this is mostly tied to the possibility of theft and violence. If gunfire is often heard nearby or someone has already tried to break in and steal stuff, you will probably go into this mode. Although having a large group to survive with will allow one or two people to remain on watch, so you can rest well.
"Chance you'll have to kill someone" - put another way, what are the chances you'll have to get in a gunfight as others attack your position? I just posed it this way, since actually killing somebody would be more detrimental to psychological health, than just engaging in a fight.
"Forced to make tough decisions" - this would be deciding whether or not to feed any starving refugees, adopting orphaned children, enforcing severe punishment, having to reconsider if you should bug out, etc.
"Ability to walk around and travel" - this is kind of like the antidote to cabin fever. It will keep you in high spirits if you feel safe enough that you can just walk around and get different views and do other things in the surrounding areas.
"Encounter blockades" - Authorities and groups of people that band together might set up blockades on roads. These are neutral, so they're not ambushes, but they can cause problems if they hassle you or you have to divert your course along more roads that are already dangerous. I imagine many small towns will set up blockades. Personally, I wouldn't even deal with these. If I see them ahead, I would just take another route if possible.
"Encounter ambushes" - at some point, bandits will probably set up ambushes on roads where when someone comes along, they steal from them and might even kill them (or eat them).

Email ThisBlogThis!Share to TwitterShare to FacebookShare to Pinterest
Labels: bug in or bug out, bug in vs bug out, chart, comparison, cons, pros