WHEN THE SHTF IN LOS ANGELES 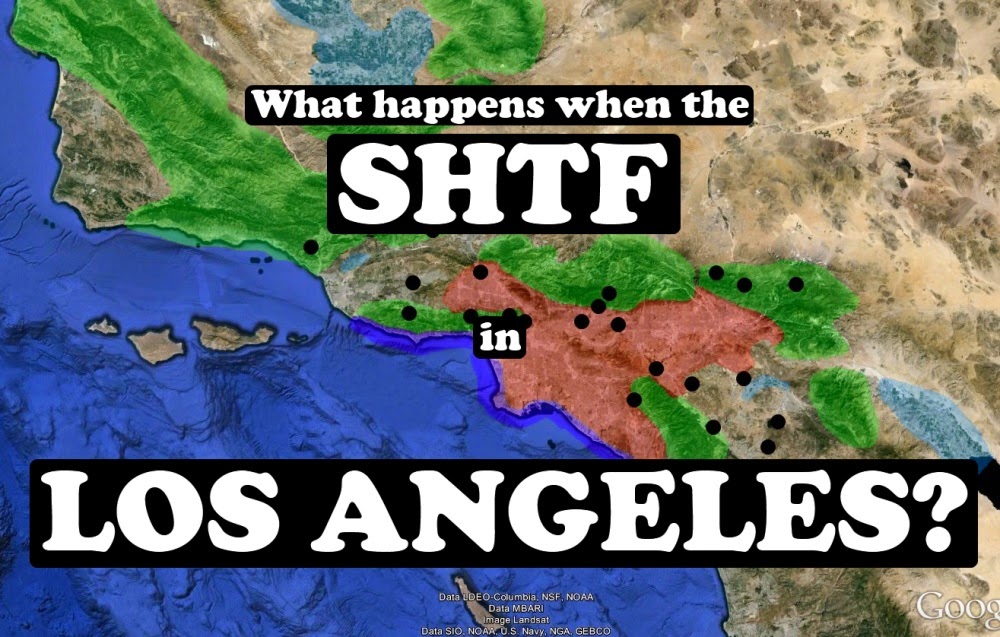 What will the people of LA do and how will they move when the SHTF?  If an event like a massive solar flare or EMP happens and the electricity goes out permanently, here's what I envision.

If you're from Southern California, you probably know that Southern California does not have enough fresh water to support its population.  So, even if people remain calm and there's no looting, you know there will be water problems, but let's be honest, LA will be pure chaos if the grid goes down for good. 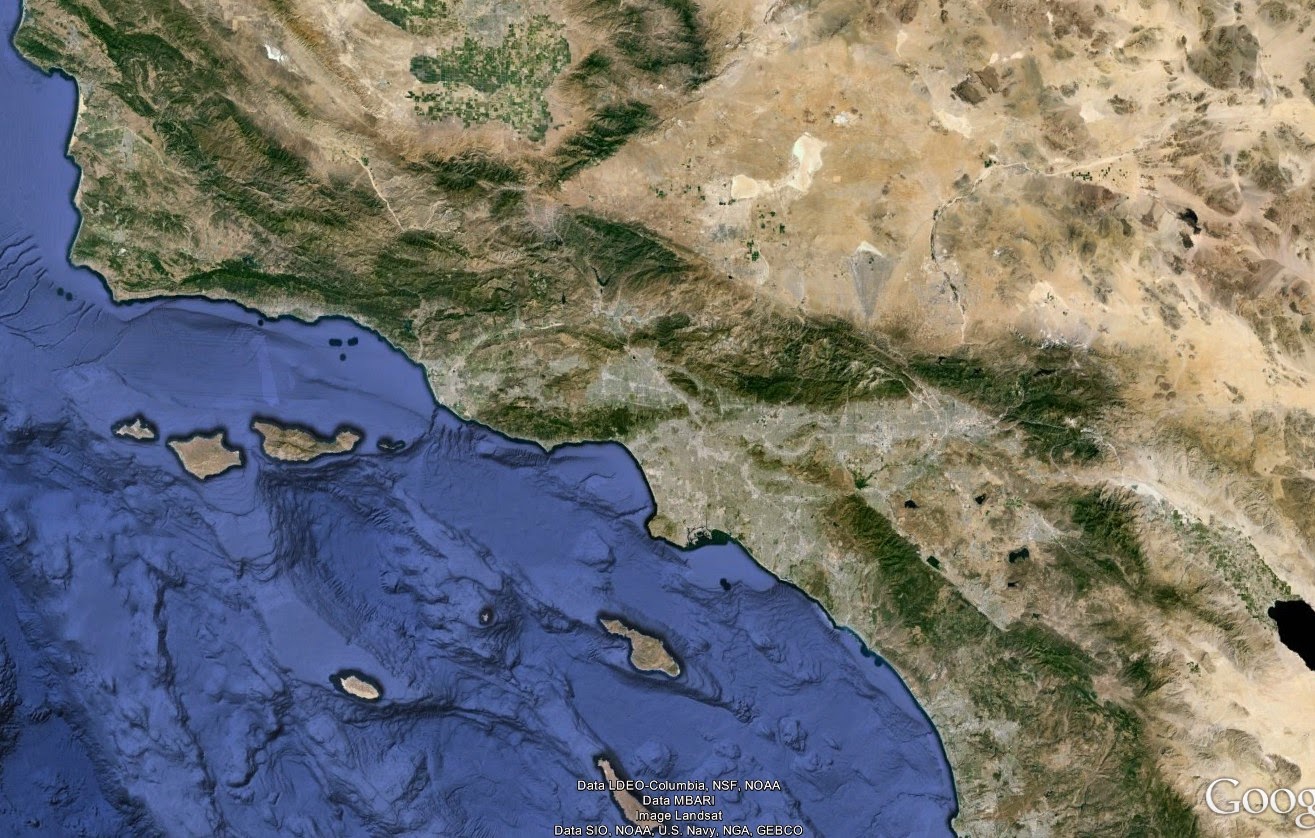 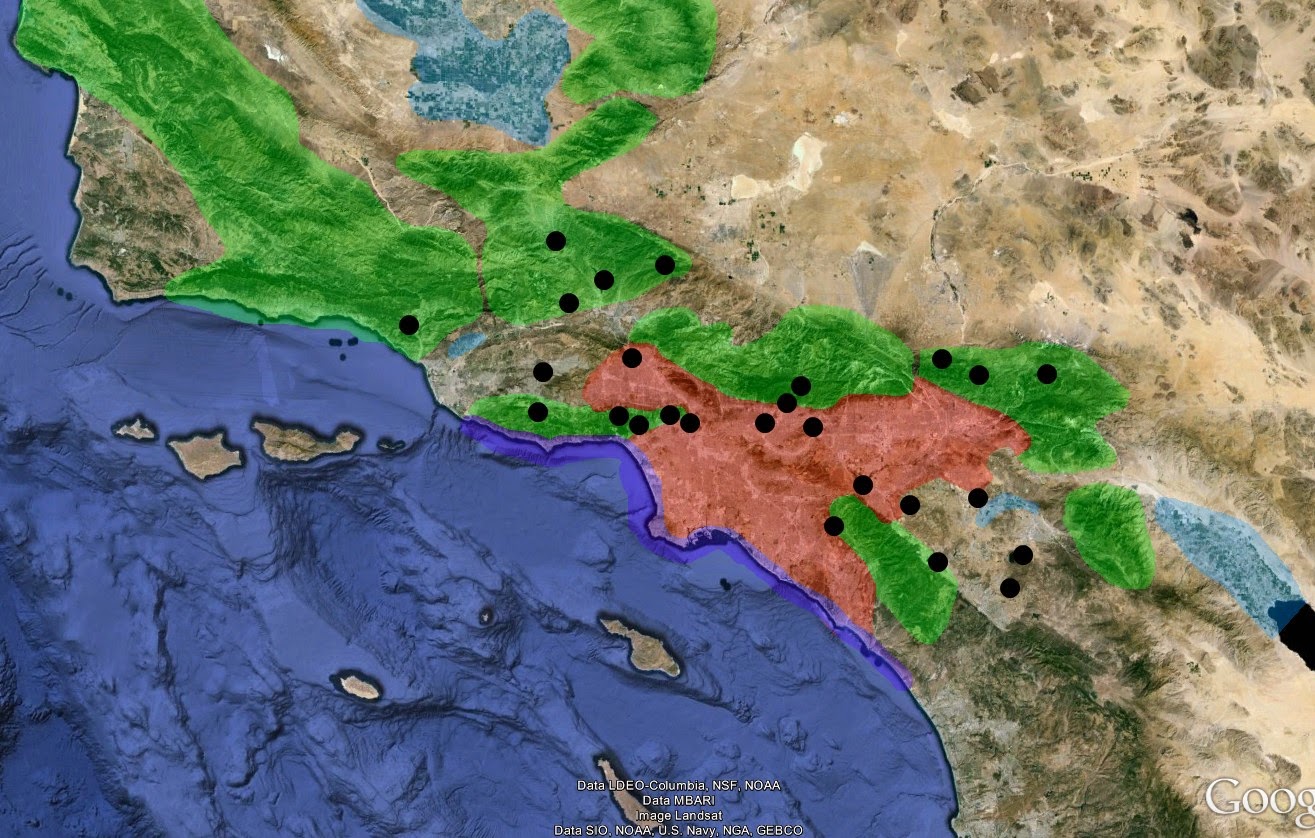 You'll also notice 26 black dots.  These black dots are large bodies of water, like lakes and reservoirs.  So, the people of LA will have a few choices for getting fresh water: have water stored up, catch rain, distill it from the ocean, scour it from water heaters, pools, bodies of water like the black dots, or they can head to the mountains to find creeks.

Food will be an issue too obviously.  For that, people will attempt to fish along the coast, fish and hunt in the mountains, scour farmlands, or just drive elsewhere if they can get away.

I wanted to see if I could predict how people would move around and how they would die, so I started with my 4 week post-shtf pie chart to get a starting point for an indication.  Here's that pie chart: 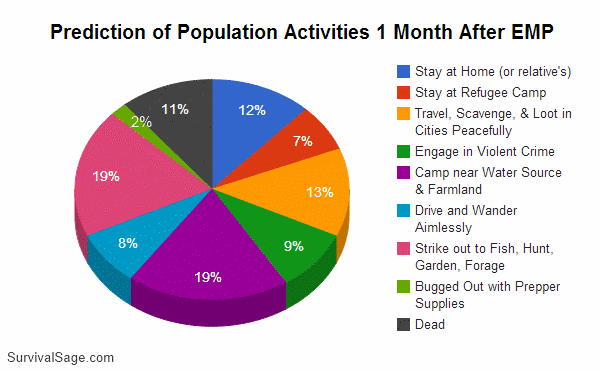 With this pie chart as a starting point for population prediction, I tweaked the numbers to represent the population of LA.  Two of the big changes being that the people of LA are true city slickers, and there isn't a lot of farmland nearby.  They rarely leave the LA Basin.  Wilderness to them is staying at a cabin at Big Bear.  Also, they will need to make a long drive up to the central valley or to the Coachella Valley to find sizeable farmland.  This will be difficult on perhaps only one tank of gas and a couple million people all trying to leave LA at once.

Based on this information, I anticipate the Los Angeleans to spread out in this manner:

To make the predictions more exact, I divided the mountains and farmland into divided parts as shown below with predictions of how many people will attempt to survive in each of them. 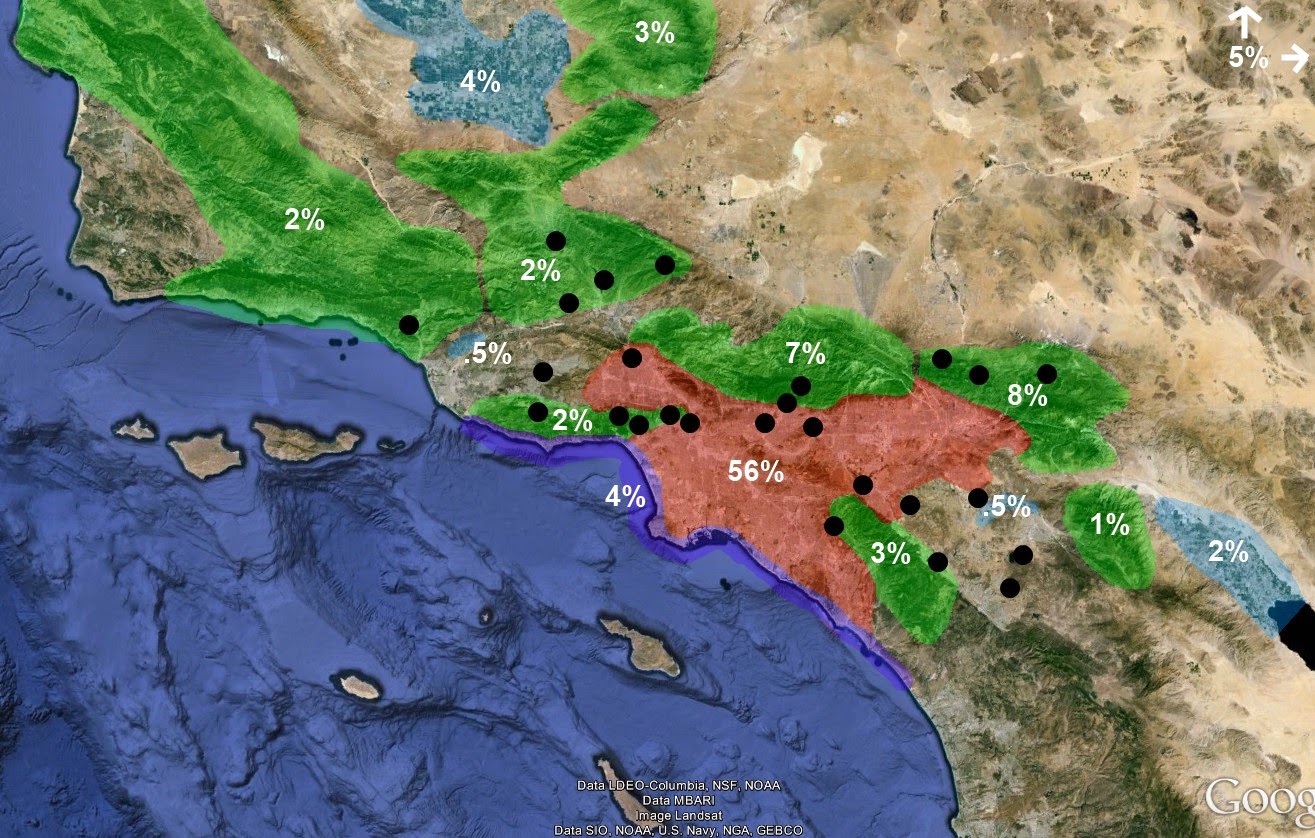 Here is the same map converted into numbers. 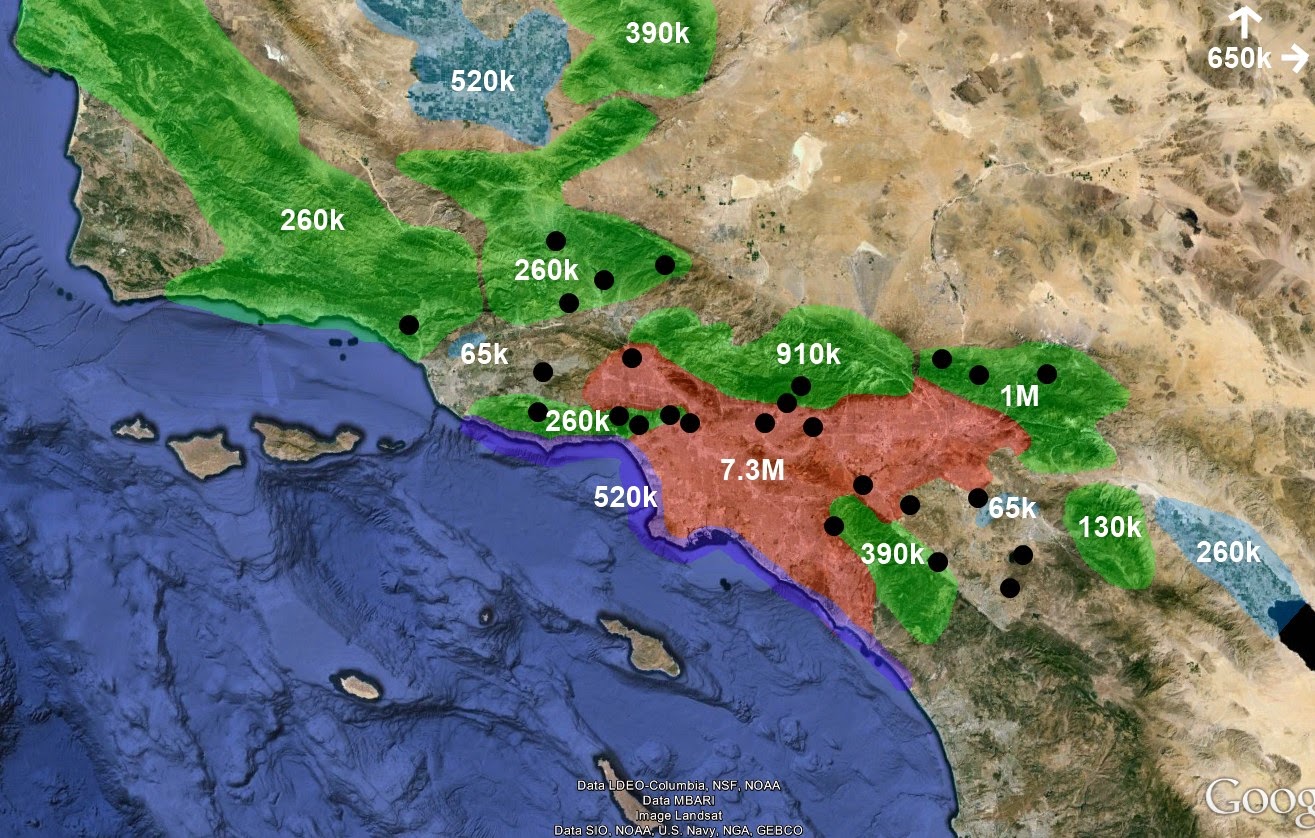 As you can see, there will literally be millions of people migrating to different places attempting to survive.  According to these predictions, over 3 million people will go into the mountains surrounding Los Angeles.  They will settle along creeks and attempt to survive.  So.....

THIS IS VERY IMPORTANT FOR PREPPERS AND SURVIVALISTS TO UNDERSTAND:

Just because a wilderness area is unpopulated right now, do not make the assumption that it will also be unpopulated after the SHTF.  It is only a minority of people who will head for the wilderness, but a minority still equals millions.  Millions of people will come to the conclusion that they'll need to head for the mountains.  In dry locations like the American Southwest, the problems will be amplified, since there are limited perennial streams.

However, many of the people heading for the mountains around LA won't go there right away.  Many will go there only as a last resort.  Many will make it to the mountains and die of starvation within a month.  If you do plan on going to these mountains surrounding LA, I recommend staying super low key for the first 4-7 months.  I would hideout in a VERY off the beaten path location.  I would not camp near a body of water.  I would fetch water and store it, while eating supplies of stored food.  After 6 months or so, most people will have died, and it will be safer to move to a more permanent bug out location.

The water holes, indicated by the black dots, will be the most dangerous places.  I figure about 40% of the city population and many of the mountain refugees will conglomerate around these water holes.  Do you realize how many people that will be?  It will be an average of 112,000 per water hole.  That's like 26 Rose Bowls.  Some of the popular ones might even have 300k or 400k.  That's crazy!  But they'll have to go there.  They will be drawn there so that they can at least get one of their necessities - water.   However, people will be starving.  The violence will be intense.  People will begin to kill each other for scraps of food.  Cannibalism will likely occur in these places.  Prostitution and rape will occur.  Gangs will take over.  Those water holes, which are mostly peaceful lakes today, will become some of the most gruesome scenes in human history.  Avoid them at all costs.

The coast people will simply be the ones who have fishing poles and figure their best chance of eating will be to fish.  They will also eat muscles, kelp, and anything else from the sea.  As long as they can scavenge some water or figure out a distillery, they will give it a go at the coast.  Violence will happen here as well.  I can almost guarantee that pier gangs will be established.  It will probably start with a couple guys with guns walking up and down the pier.  Once they see somebody reeling a fish in, they will come over and steal it at gun point.  Or perhaps, they will simply prevent people who are not from their gang from coming onto the pier in the first place, and they will take all the bounty for themselves.  You might even get pier shootouts among rival gangs.  I think you will also have some people who are fishing and catching nothing and after staring out at Catalina for a few days they think they will have a better chance of finding food on the island, so they will attempt to cross over to one of the islands to fish there.  They will probably try to steal a boat or water device of some sort.

Some will travel to farmlands.  In most places in the US, a higher percentage of people will try for farmlands, but because there isn't a lot of farmland nearby, less people from Los Angeles will attempt it.  Also, by the time they realize that they will need to try something desperate like travel to farmland, the roads might be jammed by abandoned cars.  I figure a couple million people will initially attempt to leave LA within a few days (assuming that cars are working.  In an EMP they might not be.), so it might be very hard to get to the central valley or the Coachella valley, especially if you only have one tank of gas or less.

Most, 56% or 7.3 million people from LA, will not make it out of the Los Angeles basin.  Nearly all of them will die.  Maybe 2% will survive, mostly via violence.  Some pretty women will be able to survive, because the wicked criminals will desire them for their good looks.  I even think some of the thousands of celebrities will be able to survive by being taken captive and protected by the gangsters that rise up.  I can totally see the possibility of warlords having some of the hottest celebrities as their concubines.  : /

I estimate that 5% will attempt to leave Southern California altogether.  It will be difficult, because they'll need to stock up on gasoline and avoid traffic jams.  5% might be a very liberal estimate. 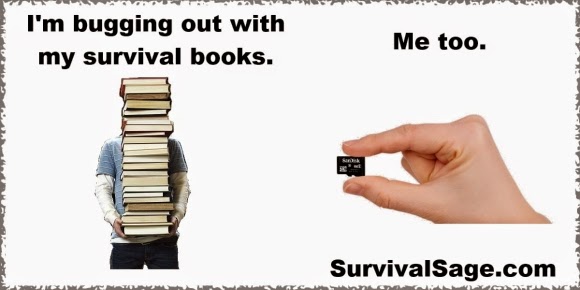 I like to think of the sea option, too.  A few thousand will escape LA on boat.  I counted about 14,000 boats in the LA region in slips and at buoys.  There will be even more boats parked at homes.  So, let's assume there are 54,000 boats in the LA region.  About 12,000 are sailboats and 42,000 are motor boats.  With all the chaos, danger, and road blocks, I predict that many boat owners will take to the sea.  Plus, some will be stolen as well.  Let's say 25% of the boats in the LA region set sail.  That will be 10,500 motorboats and 3,000 sail boats.  I would guess that 6,000 motorboats will go to the channel islands, like Catalina, while 4,500 will go along the coast, probably north.  On the other hand, sailboats don't rely on fuel, so they have more options.  Less of them will sail to the channel islands, perhaps 500.  300 will sail out to sea, perhaps towards Hawaii, the South Pacific, or just out to sea for awhile to get away.  But the majority, 2,200 will sail north in hopes that San Francisco, Portland, Seattle, or any other location is not in upheaval.  So, just to finish up with the Channel Islands thought, we would see 6,500 boats go to the islands, or about 24,000 people.  I would guess that 14,000 people would go to Catalina, 6,000 to Santa Cruz, 2,000 to Santa Rosa, and 2,000 to others, but who really knows?  However, I think a lot of sailboat people will be coy and fearful of docking.  They will probably sail close and spy on the land with binoculars.  They won't like what they'll see, so they might have to stay at sea for awhile.

1 year into the collapse, I estimate that 86% of Americans would perish.  For Los Angeleans, I would say about 95% would perish.  They are in a baaaaaad situation.  If you live in Los Angeles, get out quick when the SHTF.

----update 6/8/15----
I just realized I didn't even mention the radiation threat from a potential thermo nuclear meltdown at San Onofre.  They say to stay outside of a 50 mile radius of any nuclear power plant that goes Fukushima, and to avoid 100 miles downwind of it.  So after all the calamity that has already been mentioned, we need to take this into account too.  Perhaps people within a few miles people will get really sick and die, while people further out will only get sick and then get cancer and die later, and people even further out will not have any immediate health effects, but will die years later??  I'm not sure, but a 50 mile radius of San Onofre carves out a large part of  LA region, primarily Orange and Riverside Counties.  Take a look... 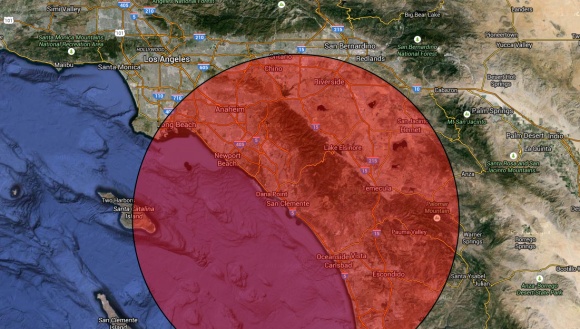