WHAT THE POLICE SHOULD DO WHEN SOCIETY COLLAPSES 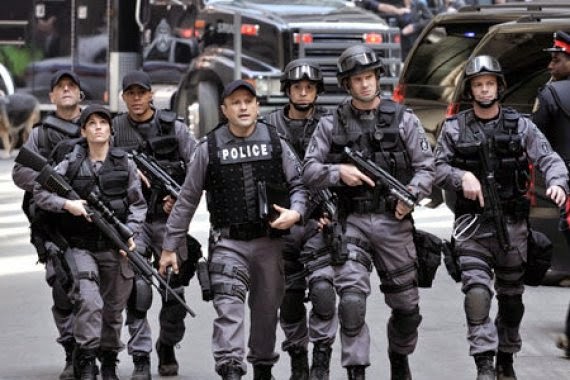 Judgment and timing is critical.  If you are a police chief or a police officer, you should follow orders and do all you can to maintain the peace and prevent looting until you know with 100% certainty that society is going to collapse.  Once you are certain that it is going to collapse, you need to be willing to abandon your position in order to save yourself, your loved ones, and possibly others.  Here's what you should do.

If your police department is not organized and not willing to work together to survive, you should act like any individual trying to survive the collapse.

Since society is collapsing, you'll want to bug out to the wilderness.  But first, gather as much food and supplies as possible.  This includes your share of police gear if you can get it.  Dehydrate and preserve the foods that can be preserved.  Pack everything up and leave with your loved ones for a bug out location.  Make sure everyone in your group knows the bug out location and back up bug out location are, just in case you get separated.  Be careful on your journey and good luck adapting to your new hunting/gather/farming lifestyle.

If on the other hand, the police department is organized and you want to do what will result in the best outcome for the largest amount of people, you will facilitate a CONTROLLED COLLAPSE.  Sounds crazy right?  But if the electricity goes out, supply lines and water lines stop running, it's not going to be possible to maintain a civil society.  Your best bet is to do a few things that will minimize violence, looting, and a rapid rise of gangs.

You can have all the police officers and their loved ones meet at a secret location with as much food and survival supplies as possible.  The loved ones and 1/8 to 1/3 of the police officers can leave in a convoy for a bug out location, or if they won't all be surviving together, a rendezvous point in a safe rural location with access to fresh water.  They will be armed and have their share of ammo with them to keep the loved ones safe.

The remaining police force can split up and secure strategic locations of interest.  At first, those locations of interest will be big stores, such as Walmart, Costco, Target, and grocery stores.  The police should prevent looting and post signs saying that looters will be shot.  Then they should work with the managers of these stores to come up with a plan.  A good plan should be something like this: The manager and the employees can get for themselves the basic supplies they will need.  Then, the manager and any employees that want to stick around can begin to secure the store with their own weapons and barter the rest of the items from the store.  They can post signs out front indicating the major items they are interested in.  Then the people can bring these items and trade for whatever they want in the store.  A store like a Walmart Supercenter almost has everything you'll need for a collapse already, but I can think of a few additonal items that are lacking, like livestock, fish, additional construction materials, and perhaps someone can provide a fence with barbwire around the walmart for security.  For a grocery store, the trade will be more obvious.  People bring survival supplies to the store and they get food and other supplies in exchange.  Any store that has meat and produce should also begin the process of preservation.

After the first day of looting, the masses of people will go for secondary targets next.  Secondary locations of interest will be Home Depots, Sporting Goods stores, Food distribution centers, and gun stores.  Police officers should be sent to these locations as well and establish the same system of working with the managers and employees, setting up security, and initiating a barter system.  Other secondary locations of interest will be bodies of fresh water nearest to the masses.  Once water stops flowing from the faucet, people will need to get there water from somewhere.  You need to anticipate where they will get their fresh water from.  Police should go to those places and prevent 'water hole crimes'.  They can also set up basic water filters and explain to people how they work, so they can set up their own filters in the future.

At all these locations of interest, they should put up signs with important information that instructs the masses what they can do to protect themselves and attempt to survive.  They should also try to hand out flyers with pictures of edible plants.

The major achievement of securing and establishing markets for barter will be that the looters and gangs will be prevented from rising to power in a matter of days.  By putting the power in the hands of store managers and allowing them to create their own security force, they will be a major power opposition to the guys who will gain their power by killing and stealing.  I'd rather have the store managers be in power than thugs and street gangs.  I would imagine that most of these stores will not remain intact and continue to be a place of trade for more than a few weeks, but at least it will be secure and systematic.  However, it is possible that a few of those places might stay open as trade centers, and eventually turn into centers of commerce to the survivors.  But most likely, once the managers and employees have the items they need and see that things are getting really dangerous, they will bug out.

Tertiary locations of interest will be dairies, ranches, and any farms and orchards that are near harvest.  Police can go to these locations and establish similar systems.  However, by this time, it will be nearing the time for the police to pull out and withdraw to the rendezvous location of their loved ones to begin their new life.  While the police are setting up the security and barter systems, they should be able to get paid their fair share of food for helping the stores.

Finally, if any police officers should be so inclined, they can check in with the population centers every now and then to see what type of power structures have been established.  If there are ruthless gangsters that are stealing, killing, and raping everyone in sight, the police might want to take them out.  Maybe the SWAT guys would enjoy this mission.  I think it requires a level of discretion, however.  I would be OK with some guys rising to power who display a minimum amount of tyranny.  For example, I am OK with people going into abandoned homes and taking stuff, or heavy discipline within one's own ranks, but I'm not OK with random executions, raping women, and other injustices like that.  Those guys need to be taken out.
Posted by Unknown at 6:00 AM

Email ThisBlogThis!Share to TwitterShare to FacebookShare to Pinterest
Labels: collapse of society, preppers, safety after the shtf, shtf, what police can do if society collapses, wrol