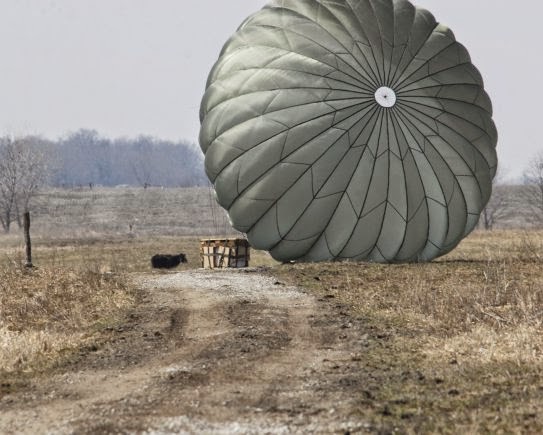 Summary: Pre-purchase survival supply care packages and use the military to distribute them to people with the intent of them living in groups of 30 near small bodies of water and arable land.

I recently heard that FEMA spends $5 billion a year in preparation for an end of the world type scenario, where the US society would collapse.  Great!  Instead of spending that money on hardening our electrical grid and protecting our critical infrastructures, which $5 billion alone could basically do, they've probably consulted with some wonderful risk assessment firm that's owned by the cousin of the head of FEMA and the rest of the money they spend on meetings, meetings, department retreats, more meetings, spectacular over the top computer software models, a state of the art underground bunker for 100 VIPs, and some more retreats.  Our government is so incompetent that I don't expect FEMA will save many people during a real emergency.  They couldn't even do a good job with Katrina or Sandy.  The military is your best bet, but in a true WROL or EOTWAWKI scenario, nobody will be coming to the rescue of most Americans.

What will FEMA do in a nationwide emergency?  Knowing how government bureaucrats work, they  will probably attempt to corral people into neat central locations so they can keep track of everybody, talk nonsense on their walkie talkies as if they know what they're doing, and bring supplies to people there.  Woohoo, slow starvation and refugee camp rioting!  Sounds like fun.

So, that being said, here's how I think FEMA should spend that $5 billion instead...

First, they should harden our electrical grid and secure our critical infrastructures.  But they're idiots, so that's not gonna happen.

If you truly want to save lives when the SHTF, here's the best way to do it from the government's perspective with a large budget.  Instead of $5 billion, lets go ahead and forward 7 years of that for this project, so $35 billion.  $35 billion divided by 330 million (about the number of people in the US at any given time) is $106 per person.  With just $100 worth of supplies, you can radically increase a person's survival chances, so this is a good start.  Now, instead of giving every person $106 worth of supplies and sending them on their way, let's group people into groups of 30.  Why 30?  It's a nice round number.  Smaller groups will lack security and manpower.  Larger groups are more difficult to organize.  With a group of 30, you're gonna get a few different families working together to forge a new life.  It's the perfect size for a group that can be secure and everybody will understand their responsibility to contribute to the group.  So, instead of $106 per person, we get a budget of $3,180 per group of 30.  Let's round it off to $3,200.  Then, we buy the following items with that budget.

These items can be distributed in a few different ways.

1) People can come to their nearest military base, where they will be handed out.  Once the group receives their items, they will be escorted by a couple soldiers to their own predesignated spot on the map.  It will likely be near a stream or small lake that has arable land.  Every small lake, every pond, and every 1/2 mile along a creek will become homesteads to the new survivors through this system.

2) All these items can be put into a crate with a parachute.  They will be care packages that can be dropped near streams and small lakes.  A couple soldiers can parachute there as well, or get to those locations by land.  Once there, they will flag down refugees and guide them into these new homestead camps with the care packages.

3) The care packages can be dropped wherever small groups of survivors have been spotted.

The items in the list are at the lowest consumer prices I could find.  If they are bought in bulk, they might be acquired for cheaper.

The first few pages of survival info will explain the items in the care package, how they can be used, and the plan for American survival.  The survival info will also have colored pictures of wild edibles, which will be necessary sustenance to carry people into the first harvest.

You may have noticed that there aren't any guns and ammo in the care package.  For this project, with a limited budget, guns and ammo would just be too expensive to include, but many people will have their own firearms, which is good.  Each group of 30, should have at least a couple guns.  Also, any soldiers that escort them will have weapons.  The soldiers might be ordered to stay with the survivors for a while and help them set up.  Or, perhaps they will have the option of joining them.

The military bases themselves can operate as a survival center, but I will talk about that in another blog article.

In this scenario, I divvy the items out as if every American can be saved, but in reality, not everyone will and not everyone would get to the point of receiving these care packages.  So, I think it would be wise to only use about $20 billion or so on these survival care packages.  The other $15 billion can be used to purchase bigger, important items, such as power generating equipment, refinery kits, and radio transmitters.  Those bigger items can be given to random groups.

One additional thing FEMA can do to assist in survival is to compile a wildlife sustainability heat map of the US.  They can survey all the edible things in the wild to figure out how many acres of wilderness every person would need to survive, which will take into account all edible plants, insects, fish, and game.  A map like this will give them a better idea of where they can send the groups of survivors and how closely they can be located in the wild.  Of course, a thing like this would be most important in the first few months leading up to the first harvest.
Posted by Unknown at 6:00 AM

Email ThisBlogThis!Share to TwitterShare to FacebookShare to Pinterest
Labels: apocalypse, care packages, collapse of america, collapse of society, doomsday preppers, emp plan, fema, futurism, plan for the shtf, shtf, survivalism, teotwawki, the end of the world as we know it, wrol