HOW PEOPLE WILL MIGRATE AFTER THE SHTF

How will people migrate when the shtf and society completely collapses?  Most preppers and survivalists have a plan in mind of bugging in, bugging out, going to a relatives house, etc., but what about the general population--how will they move about?  Will they migrate and relocate themselves?

3) When the water shuts off, most of the migration will begin

4) Most will migrate to a nearby familiar body of water

5) Many will go to places where they can fish, hunt, or eat crops and farm animals 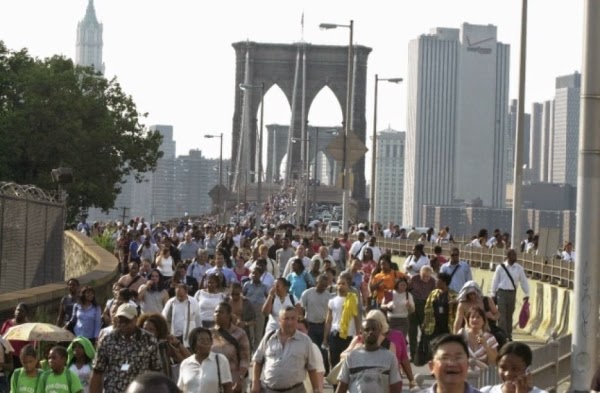 Humans are creatures of habit.  We are also creatures of comfort.  Even in emergencies, most people will not want to leave their homes.  Something has to occur in order for humans to move.  In a SHTF, end of the world as we know it scenario, it will be one of two things that force people to move: they move to find a necessity (eg. water, food) or they move to avoid life threatening danger.

This is how humans will migrate when the shtf.  Let's use the starting point as when the electricity and water shut off, since most people won't migrate before then.  When the electricity and water shut off, most people won't panic right away, unless they really understand what is going on.  Most people will stay at home still and figure that it is just temporary.  Most people have experienced blackouts and no water pressure at some point anyways.  People will get from the stores whatever they can and then return home.  They will drink their bottles of water, their juice, milk, soda, whatever they have.  Once that is gone and the water is still not running, they will begin to get nervous.  Neighbors will start sharing a little bit.  There will be some relief efforts by the red cross and national guard initially.  People will hear from word of mouth that water is available from this place or that place.  Then they will discover that they can get water from their water heaters.  All this will last about a week or two.

In this same time frame, people will be depleting their food rations.  There might be some relief efforts, but communication is really hard without electricity and gas reserves have become extremely low and some roads are starting to be blocked.  Now, people are hoarding their food.  Some people begin begging.  Some begin looting.  Some begin stealing.  After about 10 days, it reaches the breaking point.  People are starting to feel really scared.  Police and other officials start abandoning their posts.  They have decided they need to be with their families first and foremost.

The wise preppers and survivalists have already initiated their plans.  Other smart people have begun to put 2 and 2 together.  They have driven to a safer place, perhaps in the country near a farm or a national park they are familiar with.

Now, at 1 to 3 weeks in (whenever water and food runs out, which will be different for different communities), people are forced to find their necessities.  Some will still be able to stay at home and fetch water from a nearby pond/river.  Wetter climates with multiple bodies of water will allow people to remain at home for longer if they choose to do so.  However that still leaves the problem of hunger.

As food rations run out, A LOT of people will try their luck at fishing.  Anyone with a fishing pole will be at the pier, along the coastline, at the nearby lakes and rivers.  In fact, I can see ocean piers as one of the first places where the bad guys begin to gain power.  Bad guys might stand there with guns and let other people fish, but take half of their catches.  Anyone who has a boat, will go out in a boat to try their luck of course.  Other people will begin to search through trash, steal from gardens and fruit trees, and eat other peoples' dogs and cats.  Other people who have guns will do their best to hunt in order to eat.  Hunting and fishing are the two primary forms of food gathering that people will try once the store shelves and their pantries run out, since it is what most Americans know the best.

We will begin to see a pattern of human movement.  If water and potential food is within range of one's home, they may attempt to stay.  In dry regions, we will see people migrate to the nearest bodies of water.  For example, people in Las Vegas will all go to Lake Mead.  Many people will go to rivers and lakes in order to fish.  A lot of people will go the coast, so long as fresh water is nearby as well.  Many people will seek out agriculture lands and strip the lands of whatever food is on the trees, plants, and vines.  Others, will head into the woods to survive.  You should expect to find people resettle in locations that offer both fresh water and food, such as farms with bodies of water nearby, coastal areas with fresh water nearby, borderline swamp areas, mountains, woodlands, food distribution centers near a freshwater source (at least for awhile), etc.

The number one driving force for migration will be for fresh water.  In wetter areas with multiple bodies of water, people will spread out their migrations across multiple places, which is good.  In drier areas, the migrations will be much more predictable.  The most known local bodies of water will be the first migration point for many.  They will also become very dangerous.  The second driving force will be to find food.

As time progresses and things get more dangerous, people will begin weighing their options.  People that migrated to the coast, a local lake, or the main river will begin to see how few fish there are and how dangerous things are getting.  They will begin to realize the grass is greener on the other side.  They will attempt to find more remote bodies of water.  They will migrate to the mountains and the woods.  Some might decide to migrate up river.  Those with boats on the coast will begin to seriously consider leaving the mainland altogether as it is becoming dangerous and food is scarce.  For example, people fishing on the coast in the Ventura/ Santa Barbara area will look out and see the possibility of living on one of the Channel Islands.  The islands of Maine will be promising for others.  A few brave sailors will head for the South Pacific or any country that has not collapsed.  Some, unfortunately will begin to lack energy to the point they are no longer fit enough to bug out.  They will stay where they are and starve, unless an angel of a human comes along to save them.

Small towns and rural areas will fare better for awhile.  They will have more food to begin with and there won't be as much violence.  However, even small towns are just not set up to sustain people, so there will be some movement out of those towns in a similar fashion.

I'll take a stab at how many people do what:

10% of the population bugs out within three weeks

30% of the population stays home and eventually dies, but some will be absorbed into local power structures that rise up

60% of the population will migrate in stages, first to a local body of water, where some die from violence, some join the local power structures, some starve, and some move on to greener pastures.

One last thing to mention is that a lot of people will be forced to migrate by the threat of fires.  With looting and open fires for cooking and heating, mistakes will be made and fires will start.  There won't be any firemen to put them out, so they will rage.  This will happen in both the city and forest.  Always be on the lookout for fires and have a backup plan for them.  These will make people migrate away from the danger and away from the scorched land.  One thing that can help is to camp out on the windward side of any forest or wilderness area.  If you camp on the side the wind is coming from, you'll have a better chance of avoiding the fires.
Posted by Unknown at 4:00 PM